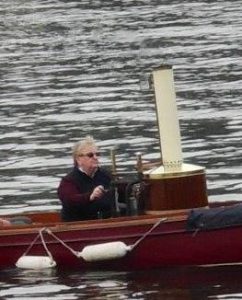 Dot came in to steamboating in 2003 when she and her husband Bob bought S.L Aurora and brought her to the Lake District. As Roger Mallinson had done considerable work on Aurora when she was on the Thames he took an interest in these two novice steam boaters and they became great friends. Following the floods of 2009 Bob and Dot became involved with the repairs to Shamrock and subsequently with the formation of the Shamrock Trust in 2010 with Dot becoming one of the Founder Trustees and she has been actively involved with the non-boating administrative side of the Trust, such as Fundraising and Promotional Activities, ever since.
Dot has a non-technical background in teaching and is the North West Area Rep for the Steam Boat Association of Great Britain and has served on the Steam Boat Association’s Committee. Since being a Trustee she has attended various courses on Sustainability of Heritage Charitable Trusts, Introduction to Bid Writing and General Data Protection Recording. Living in the north part of greater Manchester area she has easy access to Windermere and she and her steamboat Aurora are well known participants in Windermere events.