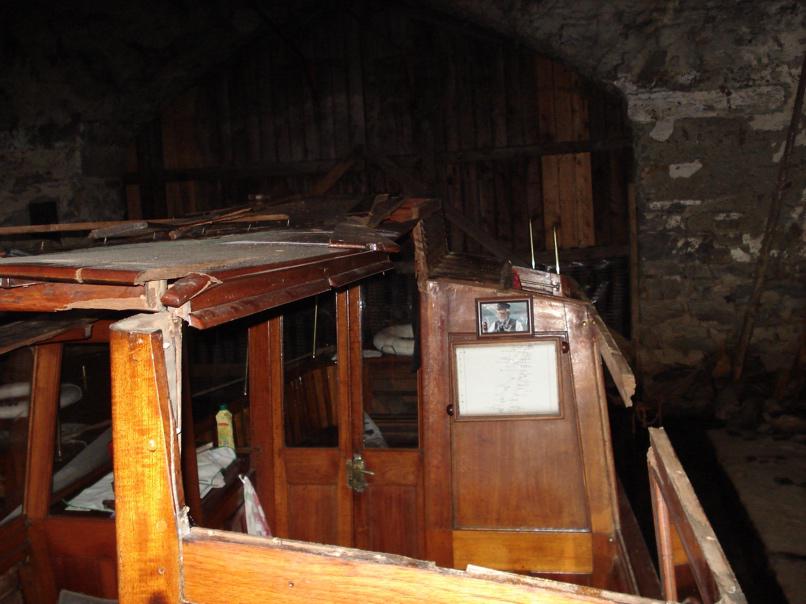 On the 20th November 2009, many of us awoke to news of the massive flooding in Cockermouth and Workington and the developing stories and tragic loss of life there.  But as these events were extensively reported, many of us were much less aware of another story that was happening on Windermere itself.  Following the torrential rain lake levels rose to an unprecedented level, measured at 9’ 7” above the weir at Newby Bridge.  For any boats inside boathouses, this was a potential disaster – and this proved to be the case for one of our beloved steam launches: “Shamrock”.

“Shamrock” has been safely berthed in a boathouse on Windermere for the last 30 years without any damage – and had survived number of floods.  For those who have not seen inside the boathouse, the building has two levels – the two wet docks downstairs and an upper floor which has had various uses over the years.  The wet dock ceiling (upstairs floor) is of timber construction, and loosely laid so that it can lift with the boats in flood conditions – a feature seen in other old boathouses on the lake.  However, modifications were made to the threemain timber support beams a number of years ago by bolting structural steel channels to either side: these, now immovable beams, contributed significantly to the impending disaster.  Under normal conditions there is a good 7’ of headroom above “Shamrock’s” cabin – but the arithmetic of a water level rise of 9’ 7” says it all, and the cabin roof was squashed against the steel beams.

Although "Shamrock" had not sunk, the cabin had been severely damaged by the steel-strengthened beam directly above it. As the flood waters receded, stock was taken of the damage, and it is testament to the original builders that the damage was much less than first thought.

Extensive repair work was undertaken by Roger Mallinson.  Burmese teak with a comparable grain structure to match the existing timbers was sourced by Colin Henwood  and donated and transported by David Harding. Roger was assisted by Kevin Halcrow of Lakeland Wooden Boats, whose knowledge was invaluable. "Shamrock" has now been rebuilt as near as possible to her pre-disaster state, with a few hidden modifications allowing for modern materials to be used more effectively.

In 2015, the Lake District again experienced unprecedented flooding when Storm Desmond swept across the North of England on December 5th and 6th. The Met Office confirmed a record rainfall in Cumbria with 341.4mm of rain in just 24 hours. For the second time in six years Shamrock was trapped under the beams of her boathouse sustaining damage which cost around £20k to remedy, which was this time covered by insurance. Since then she has been moved to a borrowed boathouse with more headroom at times of year when floods might occur. The long term solution to this problem is still to be found.

All of these events have demonstrated the vulnerability of our historic launches.

“Shamrock” is not only registered with the National Historic Ships Register, but is also a member of the National Historic Fleet. As Roger Mallinson is – like Shamrock herself - not getting any younger and the potential loss of such a vessel had alerted many people to the risks of losing such boats permanently. For Shamrock at least the time had come for longer term planning. Following discussions with the late Martyn Heighton (Director of the National Historic Ships Register) it was decided that the best way forward was to set up a Trust to take over the ownership of “Shamrock” and to provide a sound basis for her future preservation and operation.

The Shamrock Trust was set up as a company limited by guarantee (incorporated in England number 7217476) with aboard of expert Trustees. The Trust was duly accepted by the Charities Commission, with a Registered Charity (number 1136535). Martyn Heighton, in particular, was extremely supportive in achieving both of these outcomes and together with local experts continues to support the Trust in the ongoing challenges of maintain the boat and letting a wider public know and enjoy a remarkable part of our industrial heritage. Roger Mallinson continues to preside, supplying his incomparable knowledge whilst securing continuity for the future.

The Trust and the Future

Now that Shamrock has been repaired and is once again fully working and gleaming as brilliantly as ever, the future of the boat and the Trust needs to be thought out. There are many parts to take into consideration; cleaning of the boat, mechanical maintenance, treating the wood work, ensuring a supply of coal, checking on the boat at regular intervals, raising money, planning day trips, and most importantly, ensuring the tea pot is never empty!

All requiring time and enthusiasm, these things are generally done by the Trust's volunteers and Friends of The Shamrock Trust and, to all those who love the Lake District, history and boats, please consider joining us.

Anyone can become a Friend of The Shamrock Trust. Please find application forms under the 'Friends' menu item or the 'Friends of Shamrock' button.