The Shamrock Trust depends on the expertise and specialist knowledge of members of the board of Trustees and the Friends.

This is an Introduction to one, or perhaps more correctly, two of them:

At the end of 1976 Roger Mallinson, an engineer and submariner from Cumbria, took ownership of Shamrock. 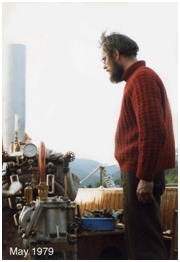 Well known in nautical circles following a rescue with Roger Chapman from the submersible Pisces 3 in 1973, he has brought extensive knowledge to the restoration of Shamrock. Both man and boat have become local personalities in the process, contributing over many years to the life and scenery of Windermere.

Roger is also well known as the driver of an Austin 7, usually accompanied by Whappet, his German Shepherd dog. The previous incumbent, Whappet 2 was a gracious canine lady who was granted access to the Transport Trust club house by Prince Michael of Kent when Roger was presented with a lifetime Achievement Award in 2013. She was subsequently awarded membership of the Transport Trust in her own right and was a fixed feature on Shamrock at rallies and other events for many years. Whappet 2 was also well known for her trick of driving the Austin 7, assisted by Roger with a hand throttle.

Whappett 2 was succeeded by Whappett 3, who sadly passed away in the summer of 2020. Roger is now supported by a cat, Mrs Moses.

Roger was awarded an MBE in the New Year Honours, 2023. The citation is “Chair and Boat Manager, The Shamrock Trust. For services to Steam Boating Heritage and the community in Cumbria”.

Intrigued by technical process in other fields, Roger taught himself to play the organ, building a small instrument at his home, before going on the rebuild the organ in St Luke’s Church in Torver, amongst others. 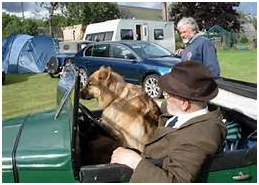 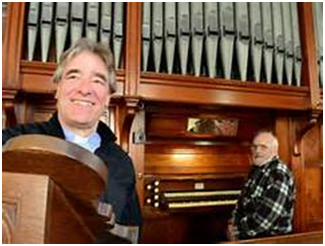 Pictured here at Shamrock’s 110th birthday celebration, it is felt in many quarters that he fully intends to be present at her 200th birthday! 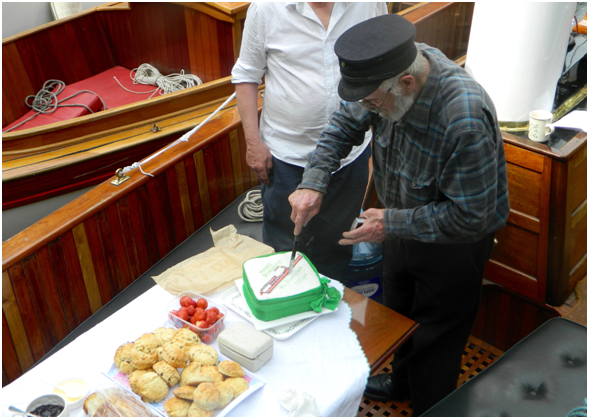